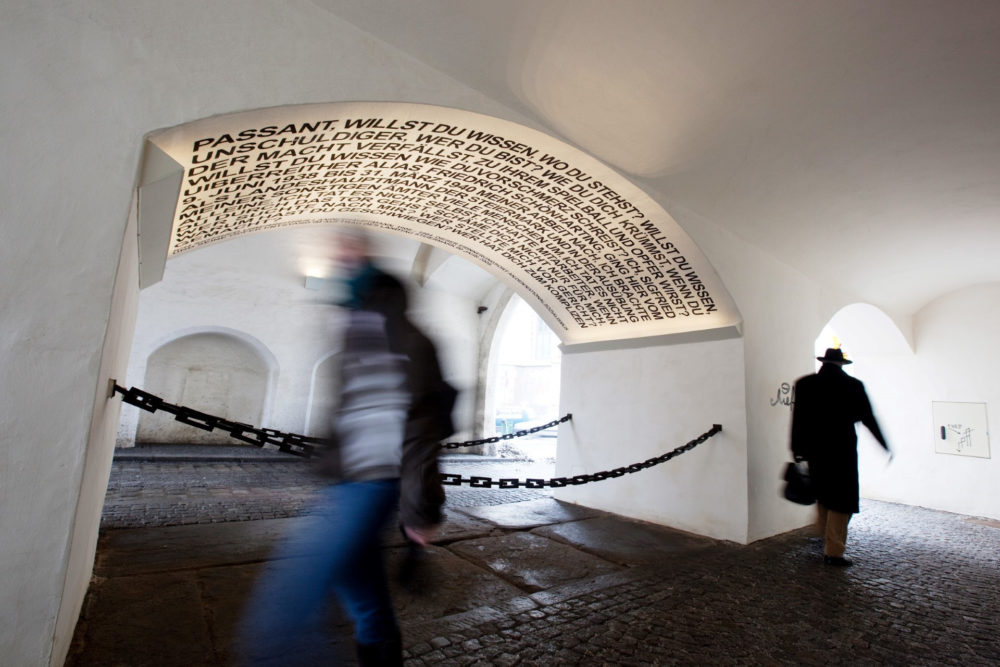 The various forms of the dialog create and give expression to awareness, and human awareness is the work’s true site.

Just like there is no theatre without actors and audiences, no song without singers, no images without the gaze, no literature without readers – monuments do not stand for the dead but rather for the living, those who let themselves be reminded, those who remember the dead. The dead have no voice and monuments stand for nobody, if the living remain silent or turn away. And yet, voice in this context might not mean approval. Even if I disapprove of a work, if I don’t want it or even want it destroyed, it is my voice that is – especially as a discord or violent act - closer to the work than it admits.

I Sigfried Uiberreither, Provincial Governor, is the first of two related public works by Jochen Gerz in Graz and the province of Styria on the subject of public denial and individual responsibility (63 Years Later, 893). A decade after Die Gänse vom Feliferhof (125), which was not realized due to opposition by the Austrian army, the two works represent a paradigm shift.

Jochen Gerz invited the public to assume authorship for a work which would be more than a memorial. The late date of the project was a theme in itself, for the lives of the original witnesses were coming to an end. I Sigfried Uiberreither, Provincial Governor is a public forum of the present day experience and commitment to the question of personal responsibility.

Questions by the Provincial Governor and the Governor of the National Socialist German Reich in Styria, were posted in the arch of the Burgtor gate in Graz. Sigfried Uiberreither (1908-1984) was remembered so late for good reason. At the former and present seat of the provincial government and local seat of the criminal state he represented, he questions passers-by and visitors to the city about their complicity and silence of the innocent, who were in the majority not only at the time of the crimes, but afterwards as well. The message for our times is clear: without you I would not have become Sigfried Uiberreither.

This work was commissioned as an unanimous resolution by the Styrian Parliament and government.