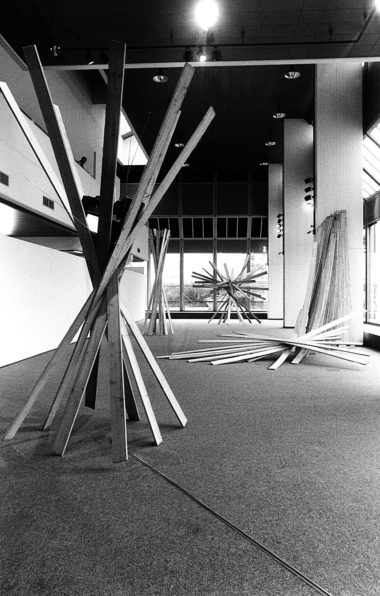 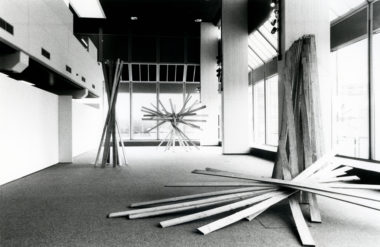 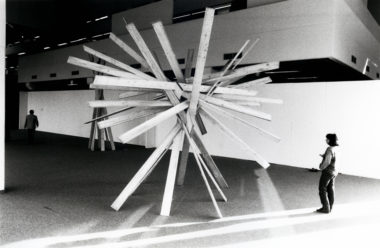 We are confronted with the paradox that the “new” time is “free” even of itself, which becomes almost a motto. “Memory” is however added directly as an instant of the past. The obvious contradiction seems to point to a unique concept of time that is not identical with the conventional one. The inconsistencies contained in the title reflect the tautological aspect of the concept of time, according to which “apart from time, there is nothing else at all to which we can attribute it” (C.F. v. Weizsäcker).

If the artist wanted to refer back to something here, he would also be free of responsibility towards the audience. He detaches himself from his works, the works have detached themselves from him, are only a spectre, a fiction, “images of memory”. Pictures are not possible without memory, without experience, without life. The Kulchur Pieces are now a memory, have been transferred from working time to free time. Now is a new time, a liberated time.

Four structures made of framing lumber are installed in the same space. In the first, eight vertically positioned boards are joined in such a way that their upper ends form a cup. The cup is filled with paving stones. In the second, the boards are positioned at a wider angle, forming a larger cup. This cup holds five television sets. The TVs are switched on and emit audible operating sounds. The third sculpture consists of 20 boards joined in a configuration resembling a treetop. The fourth structure, composed of 24 boards, looks something like a vertical stack of lumber that has begun to slide but is frozen in the course of its downward movement. Audibly ticking alarm clocks are fastened to the backs of the boards.